Generally speaking, photographers aim to have the subjects within their frame appear sharp and crisp; however, there are times when blurring or the appearance of motion in the still image is the desired result. There are two options in capturing motion: photographing a subject that is already moving, or photographing a stationary object while moving the camera. Photographing moving objects (Taking Flight below) is nothing new; we can think of many examples such as sports action, waterfalls, waves, streams, automobiles and even people to name just a few. It is fairly simple to accomplish by using a shutter speed long enough to blur the subject sufficiently to satisfy the photographer. A tripod is not necessary unless only the moving object is to be blurred while everything else within the frame remains sharp. The opposite of this method is “panning” where the camera moves with the moving subject so it remains as sharp as possible while the background is blurred by the motion of the camera. Although, I imagine it is possible to accomplish this same end using a computer either combining two separate images or using some filter options available in most post processing software. 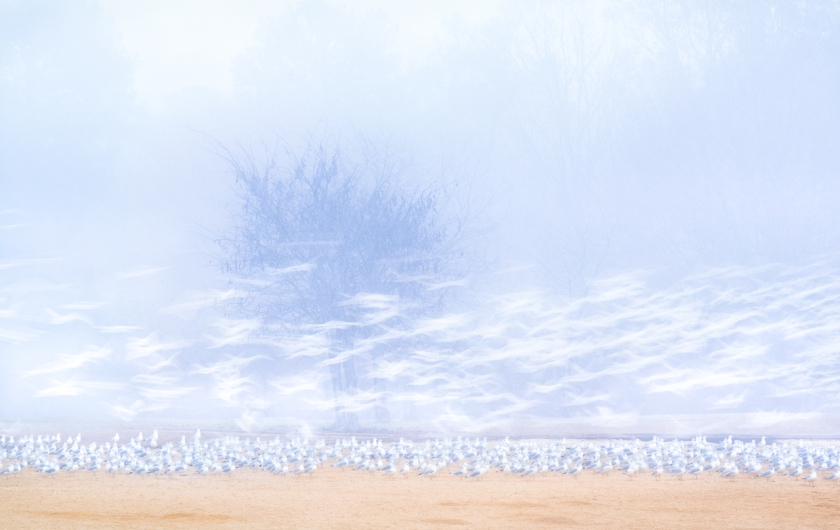 The image above contains a bit of both techniques. A slow shutter blurred the gulls as they took to the air while the fog provided the background “blur” and a tripod was used to keep the sand and remaining gulls on the ground sharp.

Blurring stationary objects is completely different in that the camera provides the blur rather than the moving subject itself. Some of the first blurred images I recall is when zoom lenses first appeared. While the shutter was open, the lens was zoomed, either in or out. Then spinning the camera was added to the zoom when the push/pull zoom was replaced with a ring on the barrel of the lens. Since these lenses came before digital, everything was done without immediate feedback. You had to wait until the film was processed before any technique evaluation could occur. And there was the element of cost to evaluate as well. But digital changed all that. If a photographer had any idea to explore, then it was possible to continue with it until the desired result was reached no matter how long it might take, without the overshadowing expense!!

However, the very first attempt I made to blur an image  using film before the digital age, did not involve moving the camera or using a long shutter speed; it involved multiple exposures on film. The idea came to me in an attempt to photograph a single crabapple tree in full spring bloom that was shaped like a wide umbrella, with branches cascading down and away from the main trunk. In order to isolate the tree from it’s surroundings and the bright sky, a telephoto lens was needed, and with its inherent thin depth of field, it was impossible to keep all the blossoms sharp since many were a lot closer than those on the opposite side of the trunk. The options were to give up or to try something different to record the tree, and it was just too beautiful not to at least make an attempt. The scene metered 16-seconds @ f/22, which would be the same as 1/2-second @ f/4, wide open and zero depth of field. If 1/30-second was used, then 15 multiple exposures should add up to the correct exposure of 1/2-second, but I added one additional exposure just for good measure. With each exposure I focused on one area of the tree and blossoms which completely blurred the other areas of the frame, and I did that throughout the range closest to me to infinity, adjusting focus with each shutter release. The final result is seen at the top. 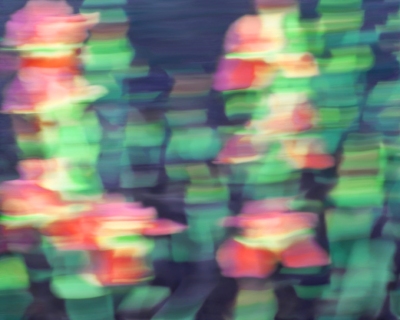 The idea of moving the camera to create streaks of color didn’t occur to me until I bought my first, simple digital point and shoot. I used the many colors of a renowned New Jersey iris garden in full bloom for the colors and spent a long morning filling up a memory card with images. Because I wanted a longer exposure without flash, I used the fireworks setting, but found I needed many, many attempts before what I wanted finally appeared on the review screen where I wanted it within the frame.

After those, there were no blurs until I finally purchased a digital SLR in late 2012; a little late to the dance after kicking and screaming all the way. That allowed much more control in shutter speeds to go along with the immediate feedback and greater latitude for blurring brighter subjects, even the sky! But it wasn’t until a trip to the southwest in the fall of 2014 that I really was immersed in both the blurred image and aspen trees. It was the lure of the bright leaves and white trunks that allowed for some high key “painted” images that really appealed to me. I found three basic techniques would produce slightly different results. Move the camera slightly, move it more broadly or remain stationary for part of the exposure and move slightly during the remaining time the shutter is open. This last method allowed leaves and trunks to “burn in” a bit before the blur so they are a bit more recognizable. Each method creates a different look to the final image and experimentation or combinations will always reveal something unique. 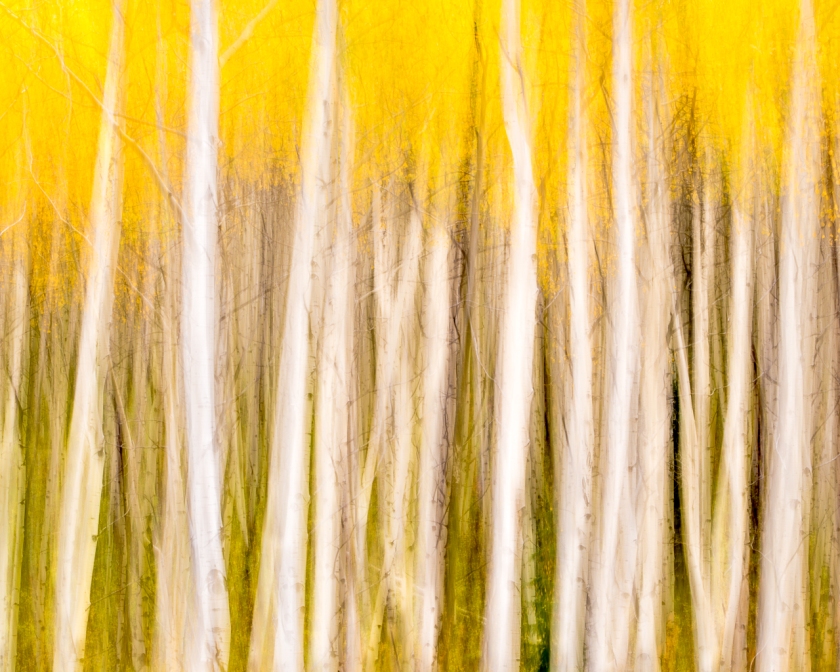 However, the common thread I found that works well is difused light, either the subject is under a canopy of clouds, in complete shade or the late afternoon light just after the sun has set. This lowers the contrast and the white trunks, rather than the usual dark trunks, evens out the light values throughout the frame.  But it is possible to create motion blurs in high contrast scenes, such as backlit leaves, but in doing so, you may need a neutral density filter to get the shutter speed long enough to create a blur without overexposing the image.

One thing about blurs that needs mentioning is that it is not necessary to create these blurs in the field. For instance, suppose you come across a great sunrise or sunset. Chances are you won’t want to waste the great light attempting a motion blur since it may take so many attempts to finally get the image you want. But, you can create a blur of a print of that very same scene! Just mimic the camera motions that would have been used to create a blurred image out in the field while in the comfort of your own home. The light of this sunrise along the Blue Ridge Parkway was just too important to miss the opportunity to capture it as it really was. It may have been the most majestic sunrise in my entire photographic history, so I wasn’t about to miss recording it while making many attempts at blurring the beautiful light. But I did keep it in mind to do so later at home. 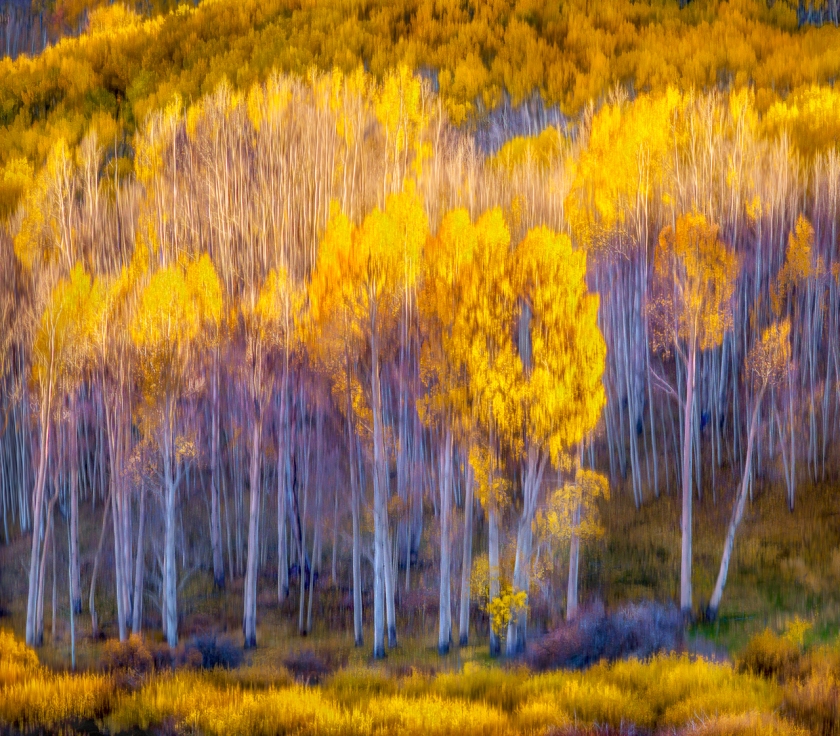 As mentioned earlier, software filters can be used to blur an image in post processing.  Two of the most commonly used in Photoshop are Gaussian Blur and Motion Blur. The intensity of each is fully adjustable to your vision through the use of sliders. In Lightroom you can use a combination of Clarity and Sharpness by moving the sliders significantly into the negative side to achieve a similar result. In the final image, both Motion and Gaussian Blur filters were used on separate layers for complete individual control. But I experimented with one additional layer using the Sparkle Filter. This really added the final touch to the image I was searching for. I wanted something to mimic dabbing paint onto a canvas with the tip of a stiff bristle brush. If anyone has seen the Bob Ross (big hair and “happy trees”) painting instructionals on television, you’ll know exactly what I mean. I really wanted to recreate the glowing of the aspen leaves in the afternoon sun and the Gaussian and motion blurs did that. Adding the sparkle really gave the image a painterly look which when viewed up close, especially in the areas of the understory below the aspens, what appears to be those brush dabs of color are clearly seen. At a distance however, the image still appears as a photograph, but with the glow I was after.

Blurs are fun to work with both out in the field and on your computer. It is an avenue which takes the recording of a scene beyond a photograph into the realm of full creative expression. By doing so, it releases the inner artist inherent in each of us. And don’t be afraid to call yourself an artist. Afterall, the moment you trip the shutter, that’s what you are; but it doesn’t begin or end there!