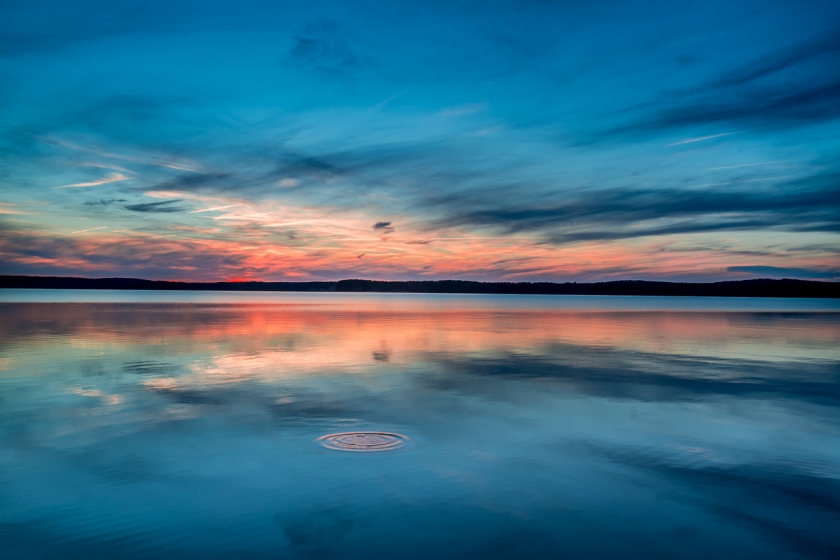 Sometimes when I arrive at a location for a sunset, conditions do not look promising for any good results. There are times when luck intercedes, conditions take a turn for the better and something extraordinary is before you just waiting for you to trip the shutter. The image almost composes itself. Other times you have to really work at getting the most from a particular set of circumstances, and even then you can come away with nothing. When I went to the lake on this evening, it was not a particularly energizing sunset…the interesting clouds hugged the horizon and they were pretty normal as sunsets go. The one thing in my favor was the calm waters for perfect reflections. But even then, still nothing to write home about; the scene needed something extra. It sure would have been nice if a fish surfaced just in the right spot within the frame to leave a circle of ripples to break the flat surface of the water. But that would be an extraordinary stroke of luck. Or… I could try to make my own ripples by tossing a rock right where I wanted them! I suppose some old skills kicked in from my softball playing days a century ago, and I lobbed a small stone high enough so it would hit the water dropping almost straight down to have just a single rippled circle rather than several from the splash if the rock were thrown with a low trajectory. The throw turned out to be pretty accurate for where I wanted it in the frame and I ended up with the photo at the top. The small circles simply add something extra on which the viewer can rest their eyes, giving the image a sense of place and making it a bit less of a pure abstract.

Since I really liked the graphic shape and rhythm of the sunset glow and radiating clouds stretching across most of the horizon, I flipped the camera into the vertical  position to create a panorama of five separate panels, keeping the exposure in manual mode and using manual focus since the camera was having a difficult time focusing. I used my trusty two-stop split neutral density filter to even out the light values between the sky and reflections. 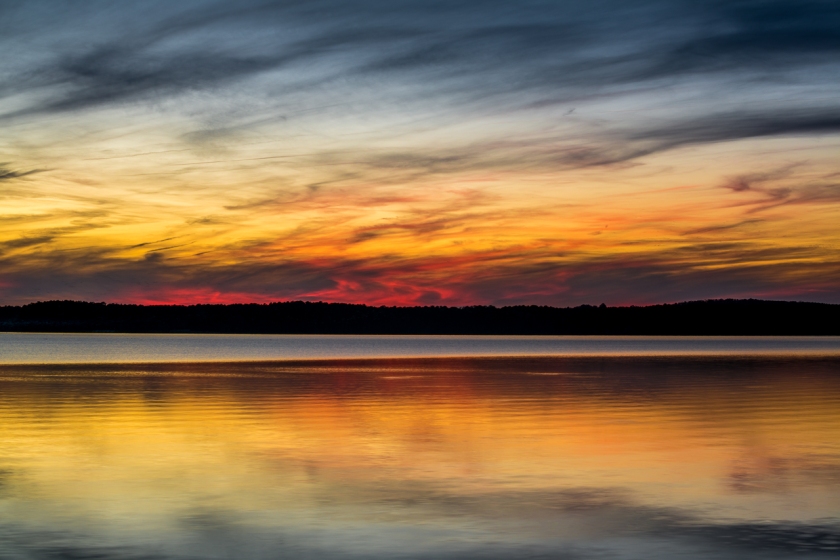 It’s always a good idea when concentrating your efforts in one direction, to see what is behind you. When I did, I saw an almost full moon rising just above the trees and since I felt there was nothing left for me with the wide-angle looking west, I switched to a 70-200mm zoom and concentrated on what was happening in the east. Although nothing really came out of the moon shots, when I turned around again looking west with the new eyes of the zoom, I could really focus on what was happening along the horizon at the 70mm range as seen in the image above. Nothing really great, but zooming in even closer to the horizon, nearer the 200mm range, I did several motion blurs narrowing in on several bands of color.

Since they were abstracts, I had additional freedom for creativity when they were processed afterward and ended up with two that seem to scream to be printed on canvas. Maybe these two will inspire me to give some canvas prints a try, but I will have to buy some canvas first.

After the motion blurs and the zoom lens still on, I was thinking the evening’s shooting had come to an end, but as I looked toward the south, there was still a hint of pastel in several bands of color along the horizon. Since this color was in such a narrow section of the sky, I had to zoom in quite a bit to fill the frame with the color, but the color alone was not enough and its reflection on the water was minimal. So I used the almost bare branches of a sycamore tree in silhouette to really make the colors pop and give a sense of place with a hint of the late fall season.

Most times I consider myself fortunate to get one decent image from the short time of a sunset. But, even though I tried my best and was basically unsuccessful that time, I was even more fortunate and especially enjoyed that evening because I happened to run into two other photographers who I knew and was able to experience it in their company. I got to know them both a bit better as we chatted all the while each of us was going about our business of photography. All too often, these short outings are a solitary experience, and although I can delve deeper into the emotional aspect of the moment when alone, sharing that time with others was a reward in itself.

These images were posted for the 2015 Jim Goldstein Blog Project which showcases what we consider our best work over the past 12 months. During this past year, I stretched my personal envelope a little by exploring panoramas a bit more deeply and continued the Jordan Lake project. I hope those who view these few from this past year will be enticed to view more of my work here on this blog.

Whenever we are witness to something we feel compelled to photograph, we are lucky to come away with a single image that illustrates our emotional connection in a way that viewers of the final print respond to in a similar way. If I can communicate my initial response through this visual medium, then I consider the image a success. Occasionally, I may photograph a scene and find it difficult to stop taking frame after frame in an effort to obtain the absolute best result possible, and when I think I have achieved that goal, I still continue to “perseverate”. Luckily, I’m not burning through film, but just filling up a memory card. But I may end up coming away with two images that are similar, yet so completely different that I’m torn between which of the two to print for an exhibit since to have both included would be redundant. Most times they are taken just moments apart from the exact same position, yet they convey a completely different response to the scene.

These first two images are a recent case in point. While the second clearly illustrates a fisherman engulfed within this dream-like world of colored fog and may be a perfect photo for a story in a magazine, the first is simply an expression of soft, quiet pastel color where the partially hidden presence of the sun, rather than the absolute, strong presence of the fisherman, provides a more nuanced context and a more magical abstract image. From my own point of view, the first conjures up thoughts of the divine intervention a sunrise always invokes, while the second is much more secular. I feel both are compelling and continue to struggle with which would better connect to the viewer. It is because I can never view my work with the new eyes of someone who has never before seen these images, that I feel I cannot wrestle my own connection to them away from my viewing them.

The second pair, although a bit different in perspective and color, differ mainly in the elimination of the bright areas of the sky and its reflection on the top and bottom of the first image to create the second. Both have the watercolor/pastel painterly quality I wished to illustrate, but the first has a more graphic look in that the various elements of clouds, sky and forest trees form basic shapes that are perfectly reproduced in the mirrored reflection in the water.  It is much more abstract than the second. It is noteworthy that in each of the two, the placement of the horizon was directly in the middle of the frame thereby breaking the “rule” not to do so. It is always important to be aware of these rules when the decision is made to break them; otherwise you would never know they are being broken!

In the second, the thin strip of clouds above and their reflection below seem to create a frame through which the scene is viewed thereby losing some of the graphic feel and design of the first, but adding greatly to the sense of depth or distance contained within the image. The quandary is which is more important: the abstract character of the first, or the greater depth created by the “frame” in the second? Which of the two wins out will only be determined in the future because the jury is still out on these two.

The final pair is a perfect illustration of my perseveration. The stillness of the scene was what I sought to get across while maintaining its watercolor properties. I consciously did not want the sun to be in the photograph because I thought those properties would be lost with it’s addition. The soft reddish glow of its impending rise through the light fog only added to the watercolor effect, while the sun’s inclusion may have destroyed the delicate pastel transitions in the sky.

As it turned out, my perseveration paid off by not moving on, but continuing to shoot as the sun appeared.  Because it was filtered through the mist, the sun’s initial appearance was much more muted than anticipated and did not “destroy” the watercolor effect. In addition, the intervening seconds allowed for the fog to coalesce a bit more into a thin strip along the treetops mimicking their shape and creating a bit more separation between the two planes of trees. Again, a dilemma. In this instance, I was not able to reach a decision which to choose and printed both!!

Although it is always a good idea to have options available to us, it sometimes leads us down a tortured path of forks in the road that, unlike that wise, sage Yogi Berra said, we cannot just “take it”.