In 2014, after my early autumn month long trip out west and processing so many of the photographs, I thought of making a book containing some of them and some text as a way of recording some of my thoughts about the trip and how much it deeply affected me and my photography. With Black Friday coming up, I figured there would be some great sales and I might be able to have a nice keepsake of the trip at a reasonable price, because without a sale, these books can easily become pretty pricey. Well, I worked really hard to put it together, writing about some things I thought were important that I took away from the trip, but I never really had enough time to include everything I wanted before the sale was over. In fact I worked on the book right up to the last moment, with the upload finishing at 11:58pm on Black Friday, just under the wire!! When it was delivered, I couldn’t be happier or more proud of this wonderful book to keep for myself and maybe even become a family album of sorts, almost like some of the albums of photos I’ve looked at from time to time that my parents put together so long ago with the “technology” of their era. 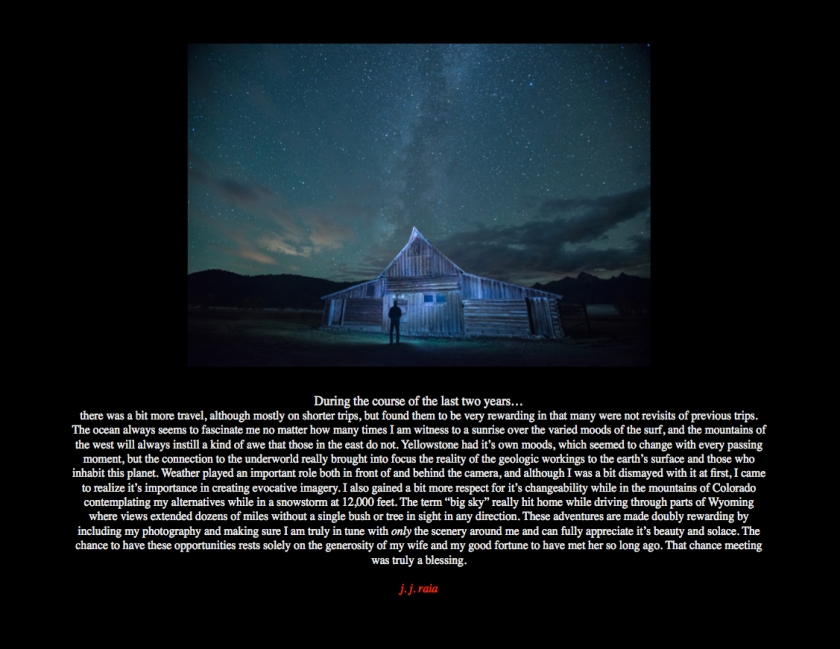 This year I had time to plan a bit ahead, having come back home about two weeks earlier than in 2014, so it gave me more time to process all the photos and to think out the text I wanted to include, how I wanted the book to be laid out and actually do a little research to add to the informational narrative lacking in the previous book. This time I went for the big book and tried the glossy, heavyweight paper for added detail and a bit more vibrance, and as an added bonus, a nice storage box was included free, but I kept the same basic design from two years ago for a bit of continuity. I uploaded it on Black Friday again and to my amazement, it was delivered on Wednesday afternoon, 5 days later!! I had actually gotten an email earlier in the morning saying it was shipped, so it was a complete surprise to actually have it in my hands later that afternoon. And I was completely thrilled with the results and couldn’t be happier.

Since it had been two years since the previous book, I included photos from some of my other shorter trips along the coast of North and South Carolina and along the Blue Ridge Parkway which I visited several times in both spring and fall during those two years. I included several pages of photos from nearby Jordan Lake that’s been a continuing project of mine ever since I switched over to digital. That filled out the book to 100 pages with loads of pictures, including quite a few two-page panoramas that I don’t believe were available the last time. I even called up the publisher to make sure I had the correct resolution for those panoramas in the largest book they make to give the landscapes I saw over these two years the most impact I could without losing any of their sharpness. It is impressive to see your own work in a book stretching almost 28-inches wide with such great detail achieved by making several panels at the time it was taken, that were later stitched together in Photoshop.

It was really an enjoyable experience creating this book and someday I may create another to go along with these few I’ve done so far, and I encourage those who are passionate about their photography to consider creating a collection of their own in book form. They are so easy to just pull out at any time and thumb through, reliving the experiences of creating those images and to read the words you wrote about them. It is also a way in which others can have a little more insight into your soul and why photography has become your avenue of artistic expression.

It seems that Lightroom will not let you delete more than 2000 images at once! I learned of it trying to purge the unusable files from this trip and because of that restriction, I ended up giving another look to a few images that were originally considered complete disappointments after two or three previous viewings. Since I had some time, I thought I would just go through the first four steps in my normal processing procedure to see if any of these throwaways warranted a bit more effort to try to get them into the realm of respectability. Those steps are pretty simple for RAW files: (1) move the highlights slider all the way left to minus 100; (2) move the shadows slider all the way right to plus 100; (3) while holding down the option key on a Mac or ALT on a PC, click on the whites slider and the image turns black. Move the whites slider toward the right until you first see light spots appear indicating areas of clipping, and back off until they disappear; and (4) hold down the same option key while clicking on the blacks slider, the image turns white and move the blacks slider to the left until you first see indications of clipping. Release the option key and observe the image while continuing to move the slider to the left until the result is to your taste. If the image shows promise, then make adjustments to the clarity and vibrance and go from there until the entire image is satisfactory. In a few days, go back and look at it again and see what needs to be corrected or adjusted and you should be just about finished.

Afternoon Light from Inferno Cone — Craters of the Moon, ID

But it’s after those first four steps that really indicates whether the image is worth investing your time and energy. I ended up working on several “throwaways” taken on the top of the Inferno Cone in Craters of the Moon National Monument which were big disappointments, both for the lack of any dynamic elements there to put into the frame, and for the resulting poor RAW images when looked at on the computer screen. The best element was a solitary tree seen above, but it didn’t line up well with the red rocks and the cinder cone near the horizon, and to photograph it with good side lighting necessitated looking in the direction where the sky was completely void of clouds. Looking in the opposite direction, there were some thin cirrus clouds, but nothing else save for those flat red rocks that I really wanted to get into the picture, but didn’t think they were all that exciting at that point.

I tried using the tree as a frame, but since it was on a downward slope, you couldn’t see much, if any of the middle ground and the slope blocked almost everything but the distant Lost River Range which was just a sliver, and not very important in that view.

I went back up top to the red rocks and tried shooting in the same direction to incorporate the clouds and the red rock, but it was still a bit uninspiring until a bit later when the very last rays of sunlight raked across the rocks. I was able to position the tripod to put the rocks into a good line that worked from the closest rock towards the side lit hill in the middle distance and beyond to the snow-capped range and the clouds above. I was one click away from trashing the photo above since the first, second and third glance did nothing for me until I did those initial four steps. It is a bit difficult at times, to see past the RAW file on the monitor and imagine what’s possible after we make our adjustments. For the most part, we try to recreate the scene as we recall it, but that recollection is also influenced by our emotional connection to the moment, what our minds focused on and what was “tuned out”. So it seems logical that when we process our work, everything that we focused on at the time the photo was recorded, should be enhanced in a manner that also focuses later viewers attention in the same way, while eliminating any distractions outside that may divert attention away from that main subject. 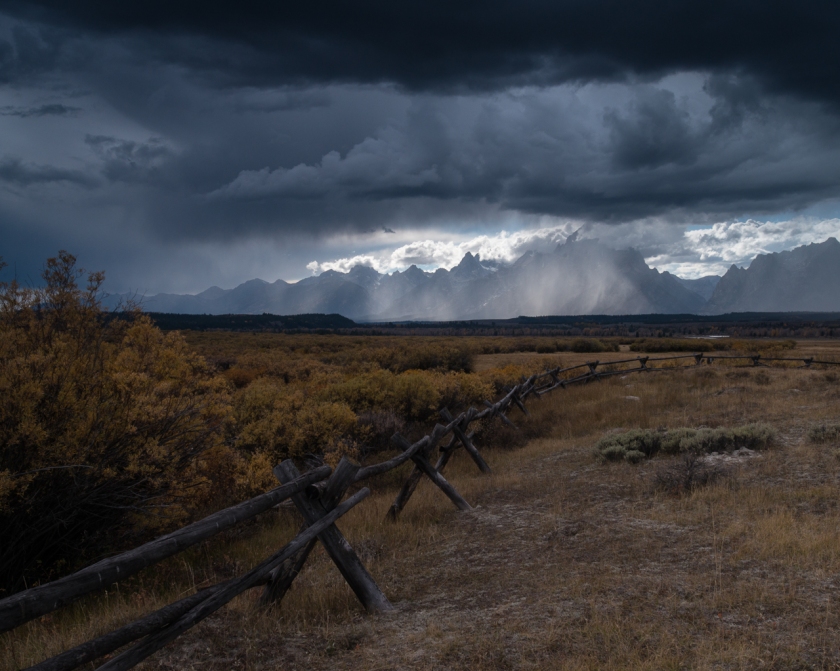 It was the same with this image above of the rain curtains passing through in front of the Teton Range by the Cunningham Cabin. It was a very dramatic scene, but the bright, sunlit clouds just above the peaks necessitated a dark exposure to avoid clipping the highlights. I probably should have done at least two frames, one exposed for the highlights in the clouds and another for the willows across the flats and blend them together in Photoshop. Instead I used a two-stop split ND filter in hopes of getting a single useable file. When I was selecting images from the trip to process, after looking at this one, I thought it was too dark, flat and just plain terrible, and just moved on to process others, and again yesterday, came within one click of putting it into the trash. The fence leading into the frame toward the peaks made me try those first four steps before dumping it, which gave it a little life, and ended up working on it until I finally arrived at the image at the top of the post. I wonder how many other images I’ve trashed in the past that might have been resurrected by taking just a few moments to employ these four quick movements of the sliders in Lightroom?